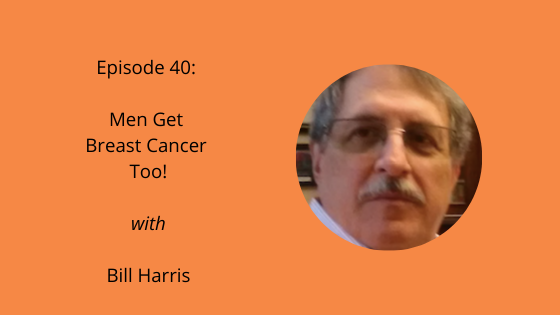 Episode 40: Men get breast cancer too with Bill Harris

When we think about breast cancer, we think it is just a women’s disease. But it couldn’t be further from the truth. Men get breast cancer too and Bill Harris helps us understand the implications for men.

On finding it yourself.

Most people do not do self-breast exams. Bill didn’t either. He found some blood on his t-shirt, originally thinking it was from his dog (who had recently had surgery). When the stain came back a second time, it made him think again. Bill started doing research and realized the only possible diagnosis is breast cancer.

Bill told me about his experience at the mammography center where the technician couldn’t quite figure out how to do his imaging. And he told me about how he chose his surgeon who had only done eleven surgeries on men (for breast cancer removal). Bill lives in a really big city, not small-town America, which makes that fact even more sobering. If he did live in a small town he may have had a surgeon with no experience operating on men.

“Men have a five-time higher mortality rate than women do with the same diagnosis.”

Men are 1% of diagnosed each year.

Most people think breast cancer is just for women. A woman’s disease. That one percent statistic represents about 2,800 men across the country. Most of them don’t know it’s breast cancer and won’t catch it early.

That is why Bill has devoted his time, effort, and energy in educating the world and raising awareness for male breast cancer.

And although men face somewhat different issues with body image, they do still get reconstruction (if that’s the choice that’s right for them).

“The problem, is that most people don’t know that it’s a problem. That men can get it too. And most physicians never see it in their practice.”

Certain genetic mutations can greatly increase your chances of developing cancer. Cancer gene mutations can be passed on by the father or the mother. Finding you have a BRCA 1 or BRCA 2 mutation can change how you choose to address the cancer question.

About 80% of people with a BRCA mutation will develop cancer over their lifetime. Some people choose to do profilactic surgeries, while others choose a wait-and-see approach. There is not right or wrong answer, it depends on what is right for each person. Knowing your history gives you options, though it you still may find it is difficult to make that decision.

So many things to consider.

One of the things that is impacted with a breast cancer diagnosis is mental, emotional, and self-image issues. Both men and women suffer from these collective issues, but it also depends how one approaches the topic.

For some, body image is very important and will dictate treatment options, for others it isn’t so important. Sometimes age is a factor, or relationship status, but sometimes it’s not. It’s just personal preference.

Another issue is parenthood. Whether you are seeking to have children or your family is established can also play a big part in how you approach treatment options.

The underlying factor is really the diagnosis. Regardless of your sexual orientation, we are all created with the same capacity for emotions, and nothing cuts to the core like an existential crisis.

Even though breast cancer sucks in so many ways, there are many humorous moments. Bill told me about the time in the mammography center where they gave him a pink paper robe and pink slippers to wear for his exam and about how after the surgery he stayed on the hospital women’s surgery recovery floor with all the other breast cancer patients and had to alert all the patients that “a man was going to be walking around.” He also mentioned that he’s a big fan of comedy – comedians, books written by comedians, comedy shows, funny movies, anything that will make him laugh.

“Do something everyday that makes you laugh. It says this illness is not all-consuming.”

Here are some of my favorite moments from this episode:

Links mentioned in this episode:

Bill Harris is a husband to Karen, a father to Eric, a push-over for two dogs, an avid reader, politically aware, dog shelter volunteer trainer for 11 years, a pretty good cook, gadget freak, packrat, amateur IT guy, two-time EMMY Award-winning editor, and has shown no evidence of disease nine years after his mastectomy.

After college, Bill began a career in journalism, as a photographer, editor, and producer. At ABC News, Bill was assigned as Peter Jenningsí editor and Senior Editor on World News Tonight after being the original editor on 20/20, Nightline, Primetime Live, and many documentaries. He has been awarded two National EMMY awards for his editing and production work on the 1988 Olympic Winter Games at Calgary.

Bill has been very active as a mentor, advocate, lecturer, and all-around cheerleader for male breast cancer patients, survivors, and their families. His journey has been published online and in print, and he can be heard on several podcasts and videos with the goal of educating everyone about this disease.

Bill fulfilled one of his dreams by being a member of the first adult team to attend US Space Camp, at the Marshall Space Flight Center in 1985, and has a few dreams yet to be realized. Bill will be 70 this July.

A new episode is released every second and fourth Thursday of each month.

Not subscribed to the podcast yet? Subscribe today so you don’t miss out on upcoming new content! Trust me, this is stuff you’re not gonna wanna miss! Don’t know how to review a podcast? Check out this article I wrote about rating and reviewing a podcast. 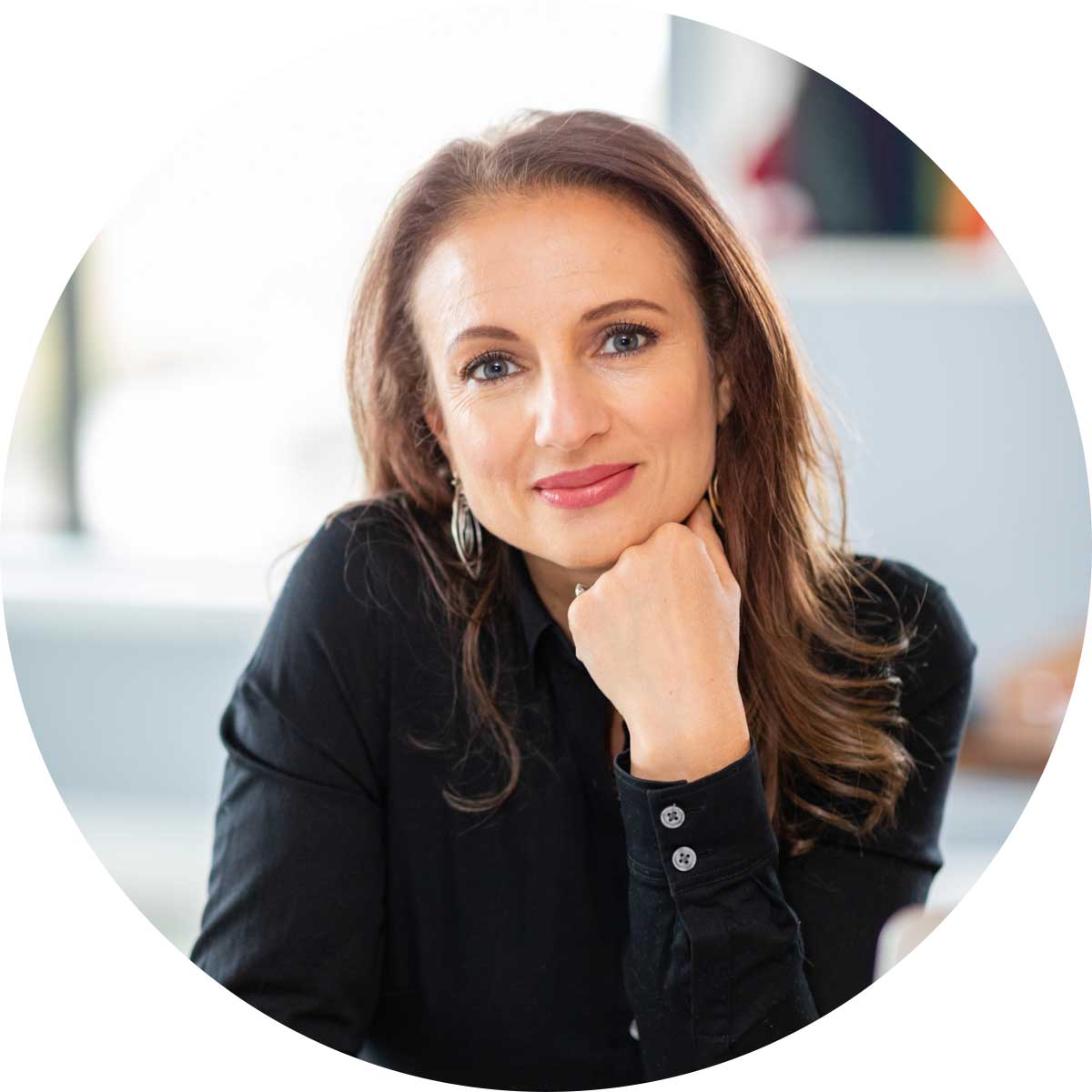 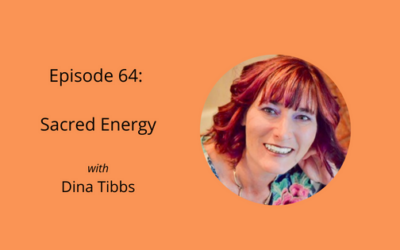 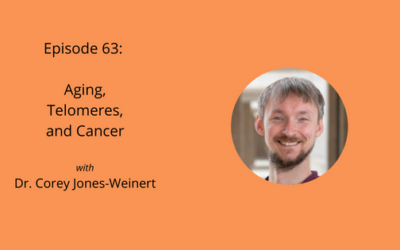 Episode 63: Aging, Telomeres, and Cancer with Corey Jones-Weinert The connection between aging, telomeres, and cancer isn’t always clear. What are telomeres? Telomeres are the endcaps of our chromosomes. Chromosomes are the entities that store our genes, which are... 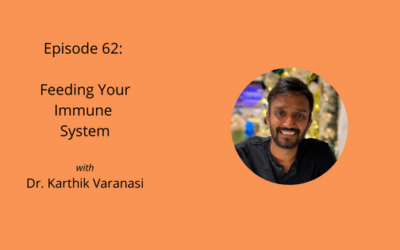 Episode 62: Feeding Your Immune System Your immune system is an essential system within your body that keeps you healthy... and more importantly, alive! But none of us is born with a manual of the proper care and feeding of your immune system. What feeding your immune...